The Formula: The Universal Laws of Success 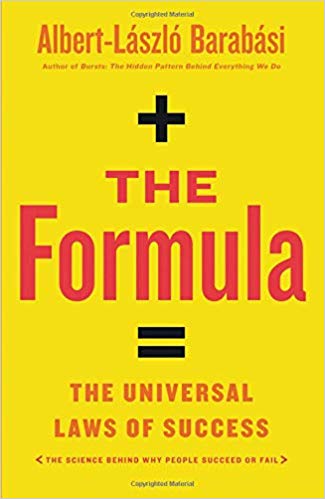 This book aims to summarize success in a single formula containing a set of five rules that catch “the complex but reproducible mechanisms that generate success”. The book club has enjoyed this easy to read book that leaves a lot of room for discussion.

This rule states that skilful performance is required for success when performance can be measured. This is exemplified by professional tennis players where performance is the only factor important for success. If, instead, performances that are hard to measure or cannot be measured, a factor other than performance will dominate, and success becomes about us and not you. This is illustrated in visual art, where performance is impossible to measure. The painting “The man with the golden helmet” falsely attributed to Rembrandt went from one of the most popular pieces in the museum to unnoticed when the painter was revealed to be an unknown Dutch artist. The painting had not changed – we had changed.

Performance is bounded, but success is unbounded

Performance is bounded. Top performing pianists, surgeons, scientists or athletes try to approach the upper limit of performance in their field surrounded by plenty of other people who are just as skilled. Most of them are respected and recognized within their field, but some of them achieve dramatic success and become superstars. Superstars dominate their fields; they earn enormous amounts of money, their books become bestsellers, they win the Nobel Prize. This tell us that success is limitless. Using different examples, the author explains that there are hidden factors that allocate credit and create superstars. We should be aware that we often cannot influence these factors and that we should be persistent, constantly improving our performance and our achievements will be recognized sooner or later. The examples also show that while competing against superstars can diminish our confidence and performance, it is important to remember that they are not infallible and that their performance is limited. Also, we can benefit and increase our productivity if we cooperate with them.

If success is unbounded, what characterizes runaway successes? To better understand this, Barabási discusses donations. One study showed that the odds of getting a project fully funded increases dramatically if there are a few donations already in place, even if these are placed at random. Once partially funded, other donors get attracted to the project and donate more. This process accelerates, leading to larger donor interest, and the project reach complete funding. This is the rich get richer phenomenon also known as preferential attachment. So, for something to grow big, the third law says that there must be some initial advantage, ever so small, and then preferential attachment will take care of the rest. In science, this translates to citations. Once a paper gets enough citations, the number of citations will grow seemingly without bound.

While team success requires diversity and balance, a single individual will receive credit for the group’s achievements

In a successful team, each individual brings something unique to the table. When combined skills and experiences exceed those of an individual, the team can solve challenges too complex for a single individual.  But the team will not be able to use their combined skills unless they overlap. Seamless collaboration is critical. For example, Barabási suggests pairing an experienced postdoc and a new Ph.D. student. Add a leader who guides them toward important research questions and away from pitfalls and outside influences, and you have all ingredients for a successful team: diversity and balance between engagement within and outside of the group. Achieving influence from others can be as simple as investing in longer lunchroom tables where you likely will sit next to someone not in your group.

With persistence success can come at any time

The fifth and final part discusses the long term properties of success. Are the most impactful works of any person made when that person is young? A quick glance at the data might suggest so but by realising that we tend to be more productive in the early years of our careers the authors were able to show that the most important work in a career can come at any point during that career. The implication is that, as long as you keep working and producing, your next work might be your most important yet. However, working in a field that doesn’t suit you might block your path to success. When trying to describe the success of any given project the authors devised the formulae S = R * Q.  S is the success of the project, R is the potential impact of the project and Q is a measure of your capability of realising projects. The authors found that this Q factor is constant when measured across a career, despite their efforts to prove otherwise. The conclusion based on their work is that we do not really improve over time or at least that this improvement is non-measurable. The take home message from this chapter would be, keep being productive in your field and your next work might be your greatest success, however, be aware of your capability and select a field which suits your talents.

The Formula: The Universal Laws of Success