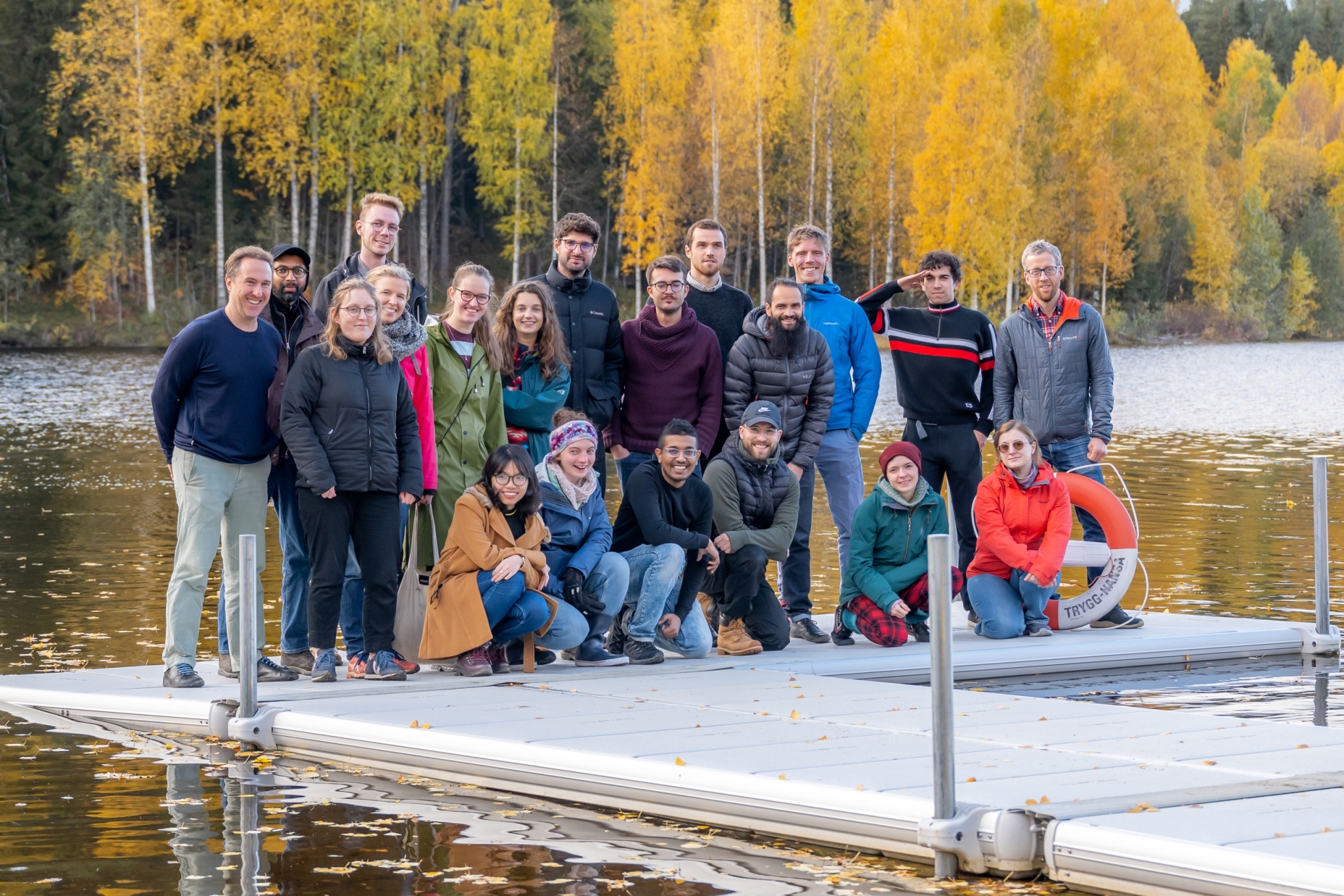 What is IceLab Camp?

When asked this question, the Camp participants themselves gave many different replies. For some, the focus was meeting other researchers eager to learn how to communicate across disciplines. For others, the goal was turning something that seems tedious, like writing a research proposal, into an opportunity to do fascinating science.

“IceLab Camp is, in short, an atmosphere in which you can grow into the role of being a scientist.” 2022 camp participant

For Martin Rosvall, IceLab director and Camp lead instructor since its inception, the IceLab Camp is about preparing its participants to create new inter- or multidisciplinary research by first teaching them to listen to each other – and to learn how to ask questions.  This skill is not just crucial for working in multidisciplinary groups. It is also an essential skill a researcher must learn to become independent in academia.

“Students have practiced answering questions since the first grade. Research is also about asking good questions, which require new skills. These skills receive little attention and can take a long time to acquire.” Martin Rosvall 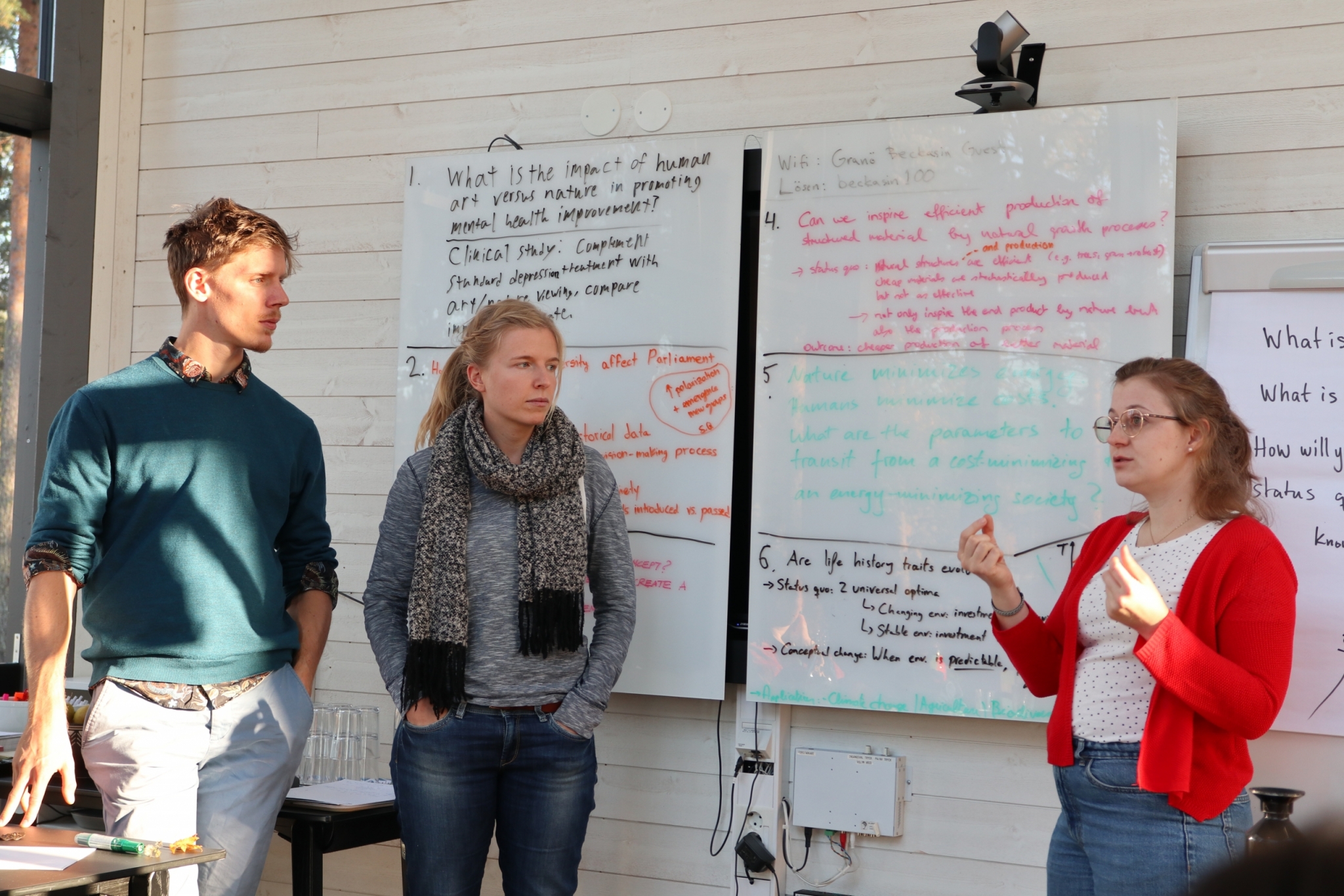 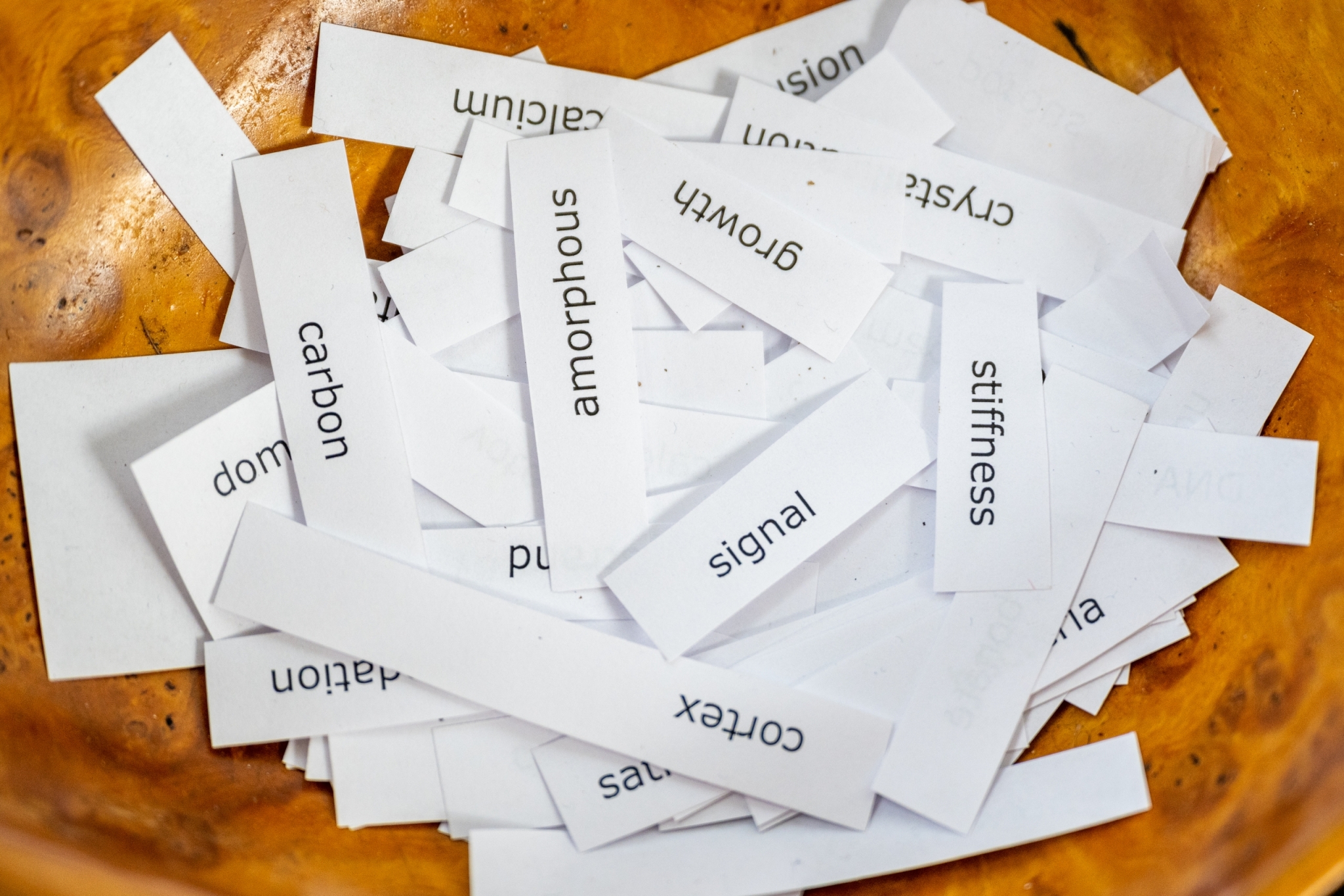 Keywords used in one of the IceLab Camp creative exercises. Photo: Gabrielle Beans

At IceLab Camp, the participants spend time getting to know each other through a series of creative exercises. On the bus ride to Granö, the students play an interview game, hopping between seats for an hour. When they arrive at Granö they are asked to introduce each other, followed by another icebreaker game involving movement and more questions. After lunch, there are even more games, where random groups are formed and given creative research question formation tasks. Finally, they self-organize into maximally diverse groups and begin searching for the research question they will develop into proposals – the outcome of the course.

IceLab Camp’s creative exercises, and how they fit into learning how to write an interdisciplinary research proposal, can appear unclear from the outset. For Sandro Sousa, a postdoc in the NEtwoRks, Data, and Society Group (NERDS), at IT University of Copenhagen, that initial uncertainty is a positive feature. “I wouldn’t spoil it by telling future participants what the games are about. The process of discovery was super fun.”

For Carmen Regner, PhD student from the Department for Applied and Molecular Microbiology, Technische Universität Berlin, the creative games were pivotal in approaching and succeeding at the challenging final research proposal exercise.

In between all the exercises and project work, participants took well-earned brain breaks to hear inspirational talks, discuss life in science, hike, play cooperative games, and alternate between baking in a sauna and freezing in the Umeälven, bordered by golden birch trees. It was a good mix, according to Filip, a second year PhD student from the department of Statistics at Umeå University. “The format was very good. Not super strict but we did a lot in these days – and had a lot of fun too”, said Filip. 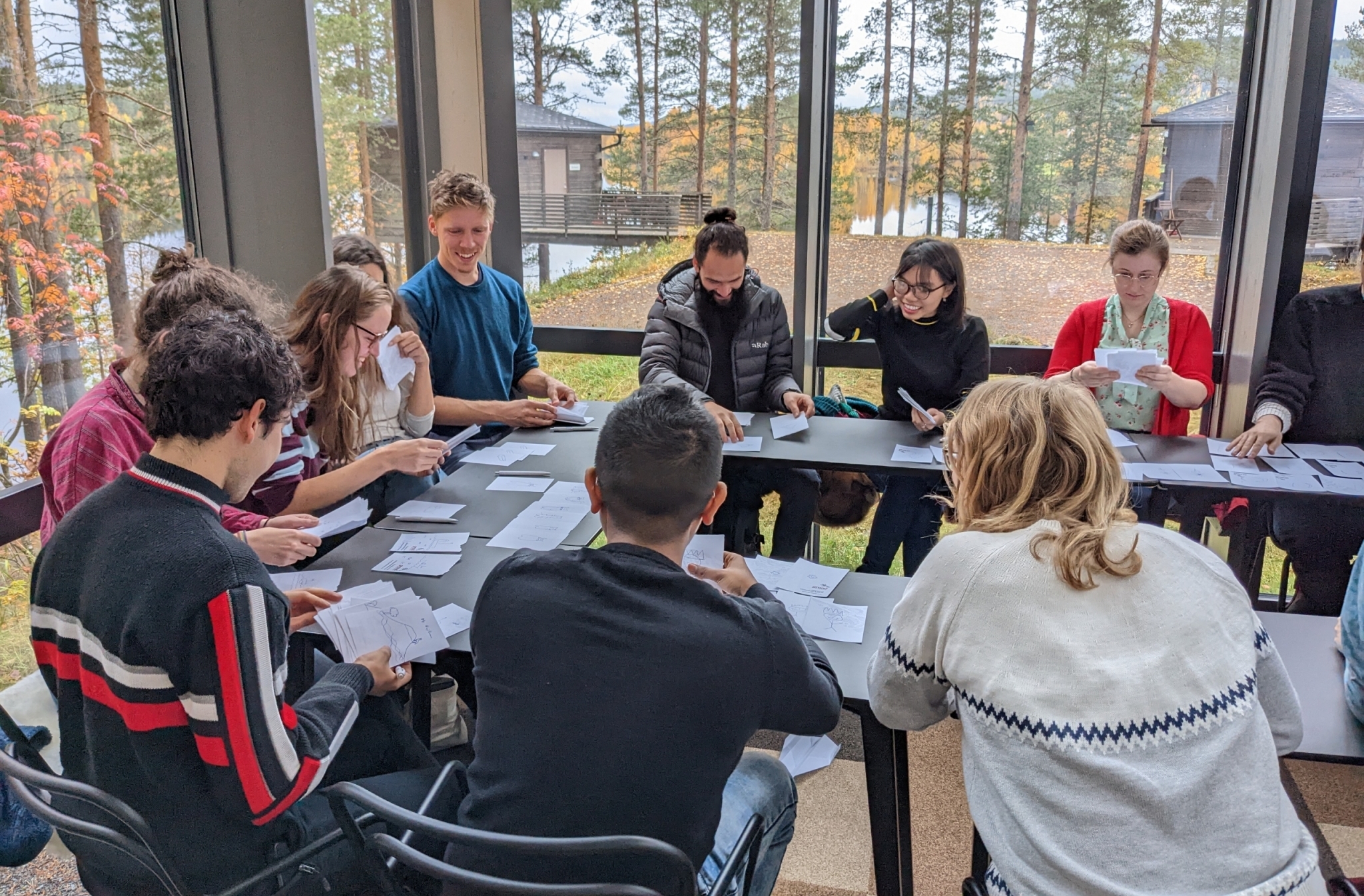 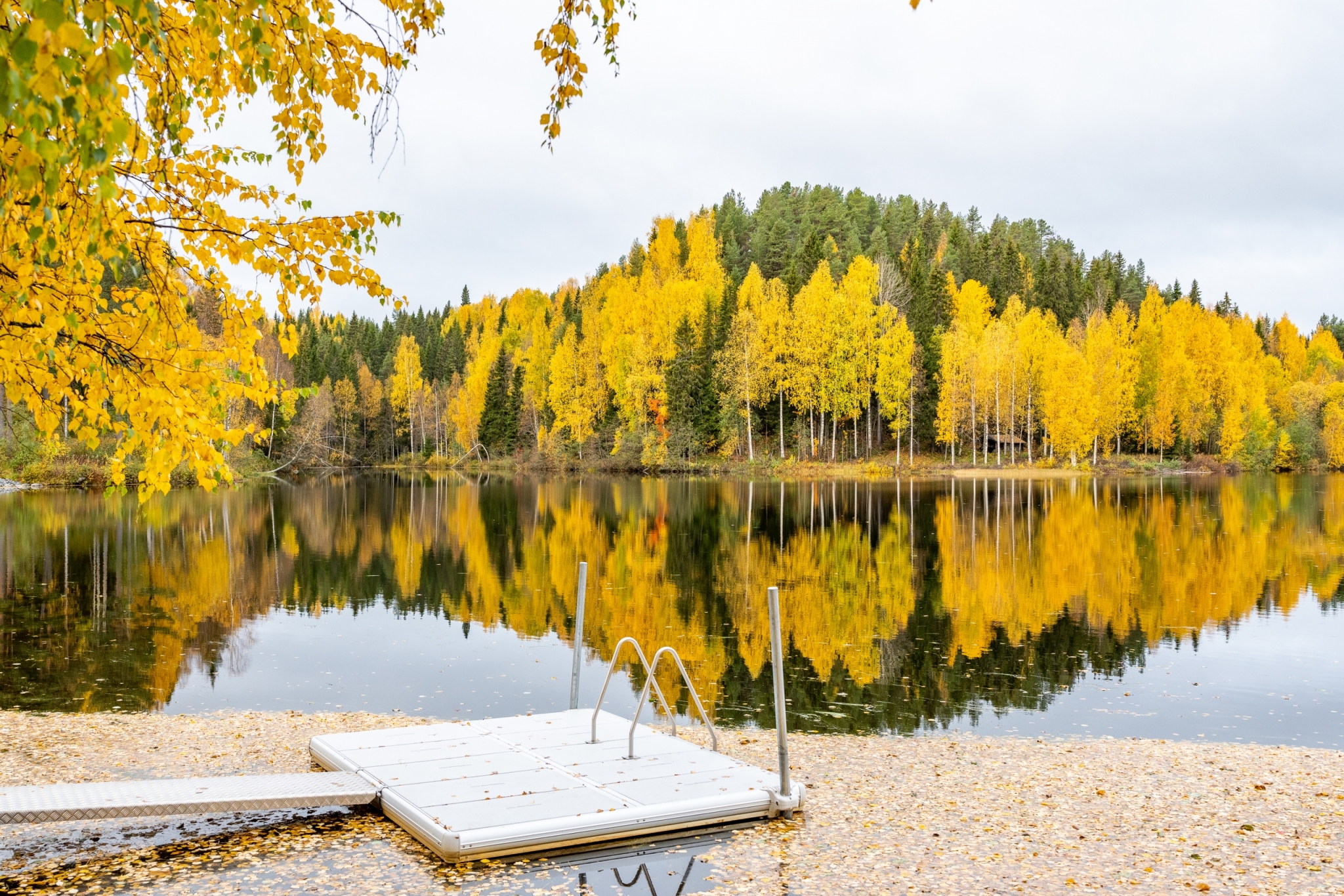 Participants worked intensively together to identify feasible projects they were interested in and then wrote them into a proposal that would encourage a reviewer for a grant funding organization to keep reading. According to Sandro Sousa, “the hardest part was coming up with the topic with the group – I had to compromise on topics that mattered to me and let others guide the direction, to ensure equal participation. We spent a lot of time debating what to do with our common interest, once we found it.”

The final day at IceLab Camp was a short one ending at lunch.  The students reviewed each other’s proposals, which was a valuable learning experience in and of itself, as most participants had not considered a proposal from the reviewer’s perspective. This exercise helped them see their proposals in a new light. For Sandro and many others, this was their favorite part of the whole Camp experience.

“Reviewing the proposals made me think from the perspective of the reader. That was very revealing. I had a clue before that this mattered but experiencing it myself was very rich.” Sandro Sousa

The project topics themselves are unpredictable and a source of consistent surprise to Martin Rosvall. “Even though I have organized this camp for ten years, I am excited each year because I always leave the camp with new insights and skills. Something that always surprises me is the creativity and diversity of project ideas the groups come up with – they always exceed my expectations.”

This year’s projects covered topics from creating a new approach to scientific publishing – a ‘sciencepedia’ – and studying the impact of collaboration between countries on migration flows to the impact on the structure of DNA of applying molecular force to a cell’s nucleus and applying lessons from superorganisms to super societies. This last project was ranked highest by the participants, thanks to how well written it was, clearly including key elements of a grant proposal Martin had shared in a prior Camp session. 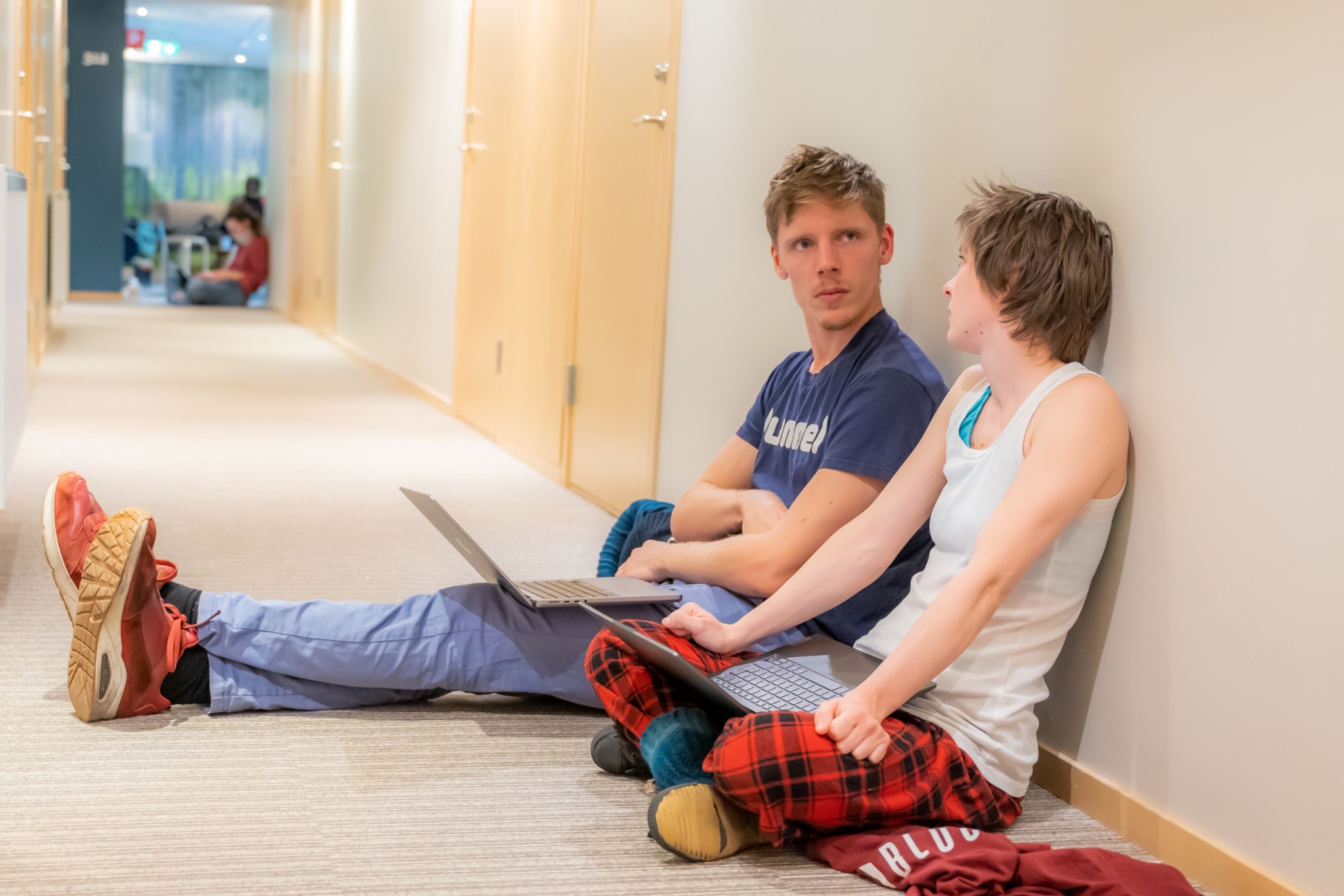 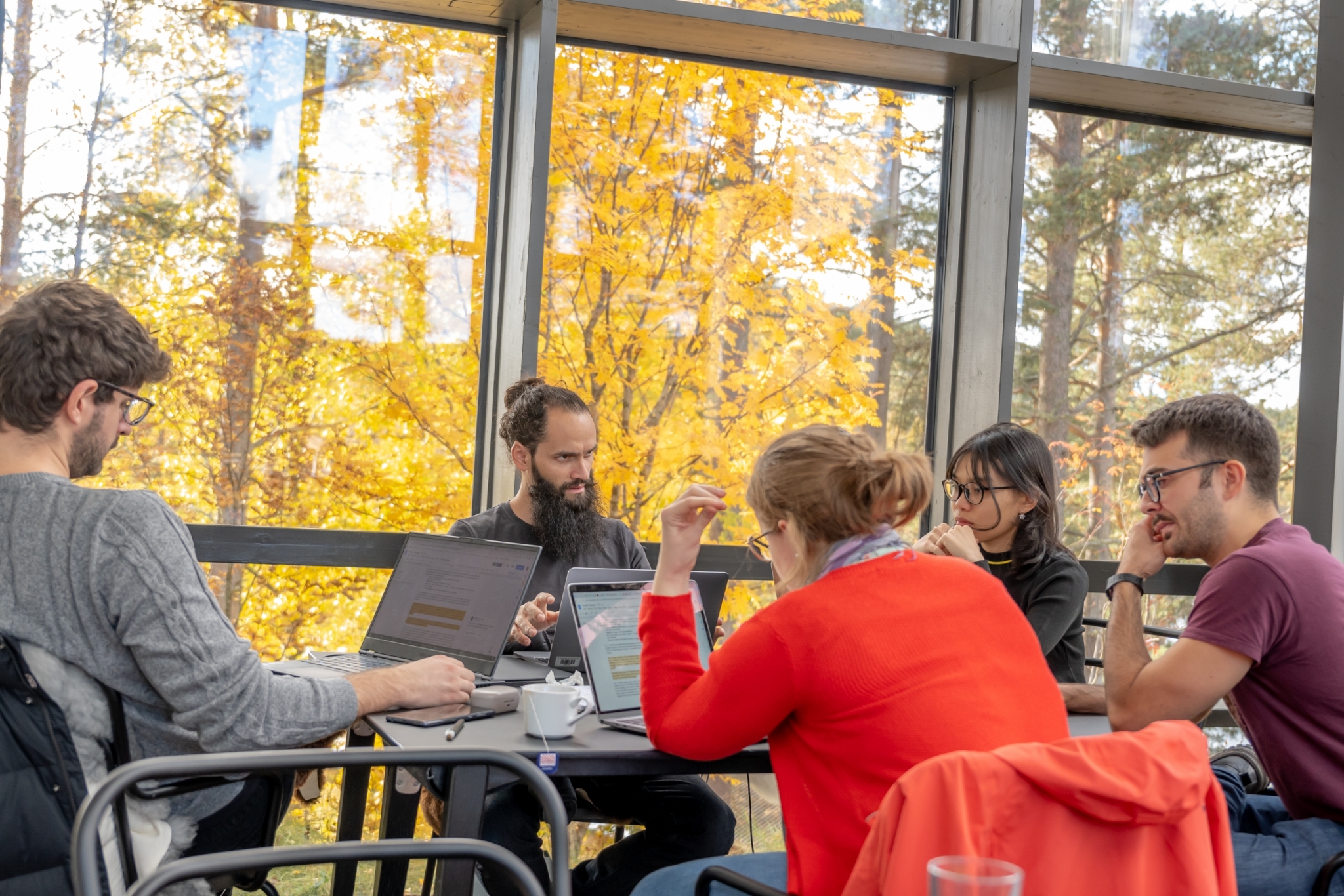 Reflecting on the whole

The importance of communication for writing a great research proposal was something that, while not explicitly stated during the course, became clear over the week and was one of the key elements that will linger and continue to influence Filip. “I will probably remember the tips and tricks of how to structure a proposal – and also the soft skills around science because they seem to be the difference between being really successful instead of just successful. Communication is the essence of science – it’s about sharing your science.”

Eric Libby, IceLab associate professor and co-instructor at IceLab Camp, hopes the students come home with new insights about the process of doing good science – and valuable tools for becoming more creative researchers. Like Martin, he also finds the Camp a source of inspiration.

“This was my second year helping Martin with the camp and I find it extremely rewarding. It is an excellent opportunity to learn from the participants and think critically about what ideas pique my curiosity and drive my research.”  Eric Libby 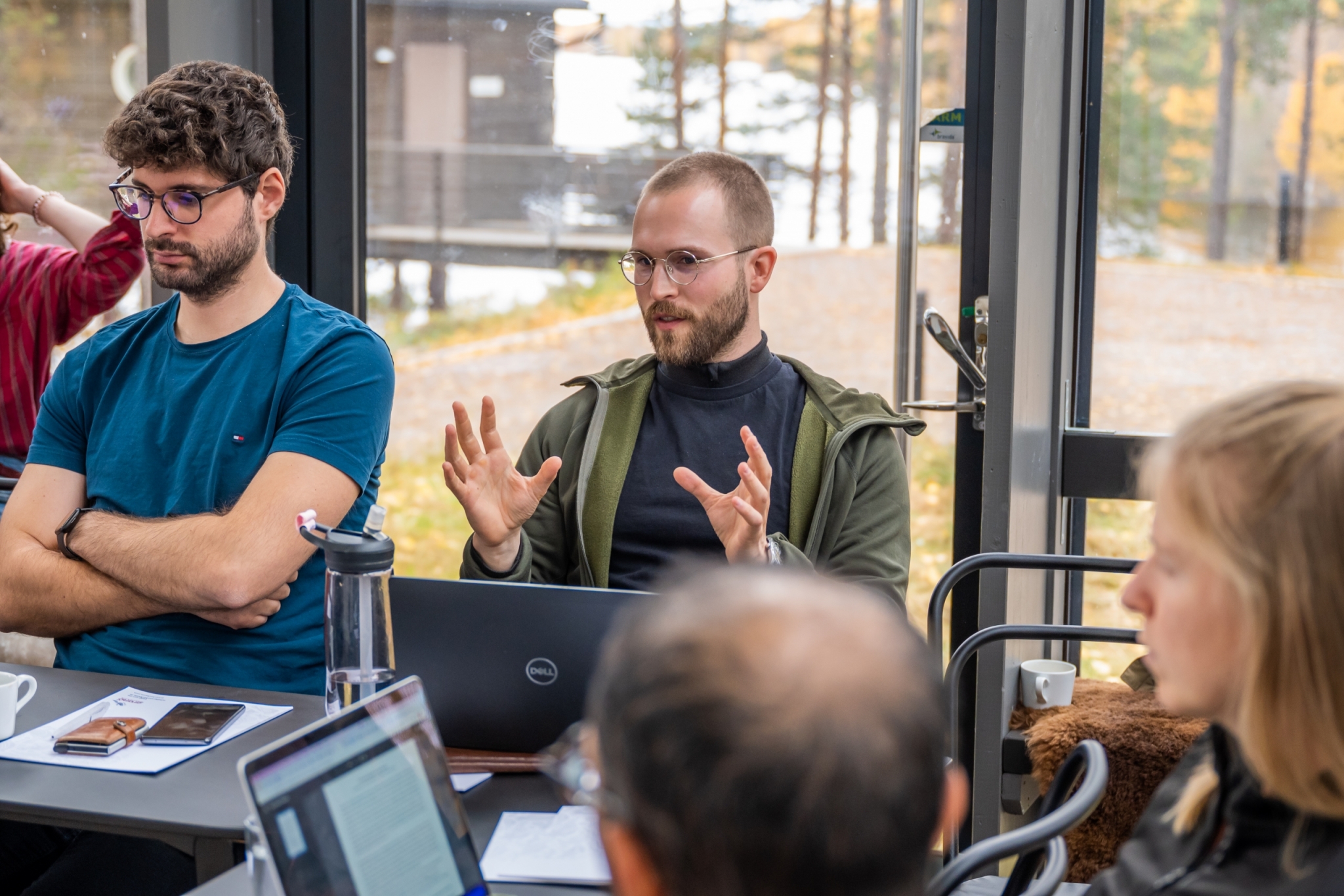 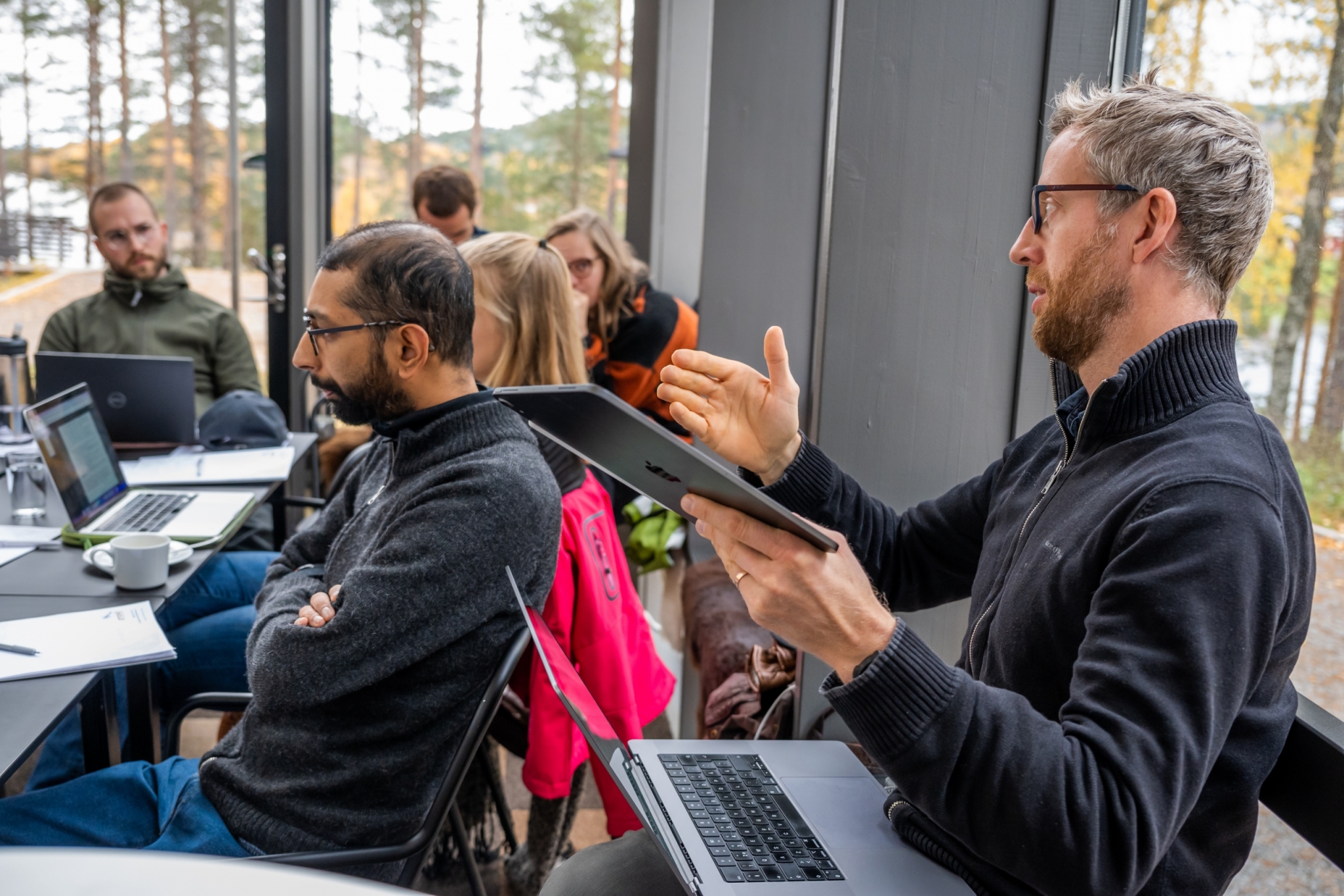 At the end, everyone involved had good things to say about Camp. “Why is this not a part of every university’s program?” asked Sandro Sousa on the bus ride back. Many carried on their conversations from Camp in the evening around Umeå, on trains and planes, saying farewell with warm hugs. Meeting each other was a highlight and may have lingering positive effects.

For Carmen, this was why she applied to join Camp. She is alone in a group of biologists and biochemists with no one to have deep discussions with about bioinformatics and gene networks and wanted to meet people she could consult in the future. Carmen says she achieved the goal.

“I learned a massive amount of stuff. I think I now have a network of people with math modeling skills to call on if I need them.” Carmen Regner 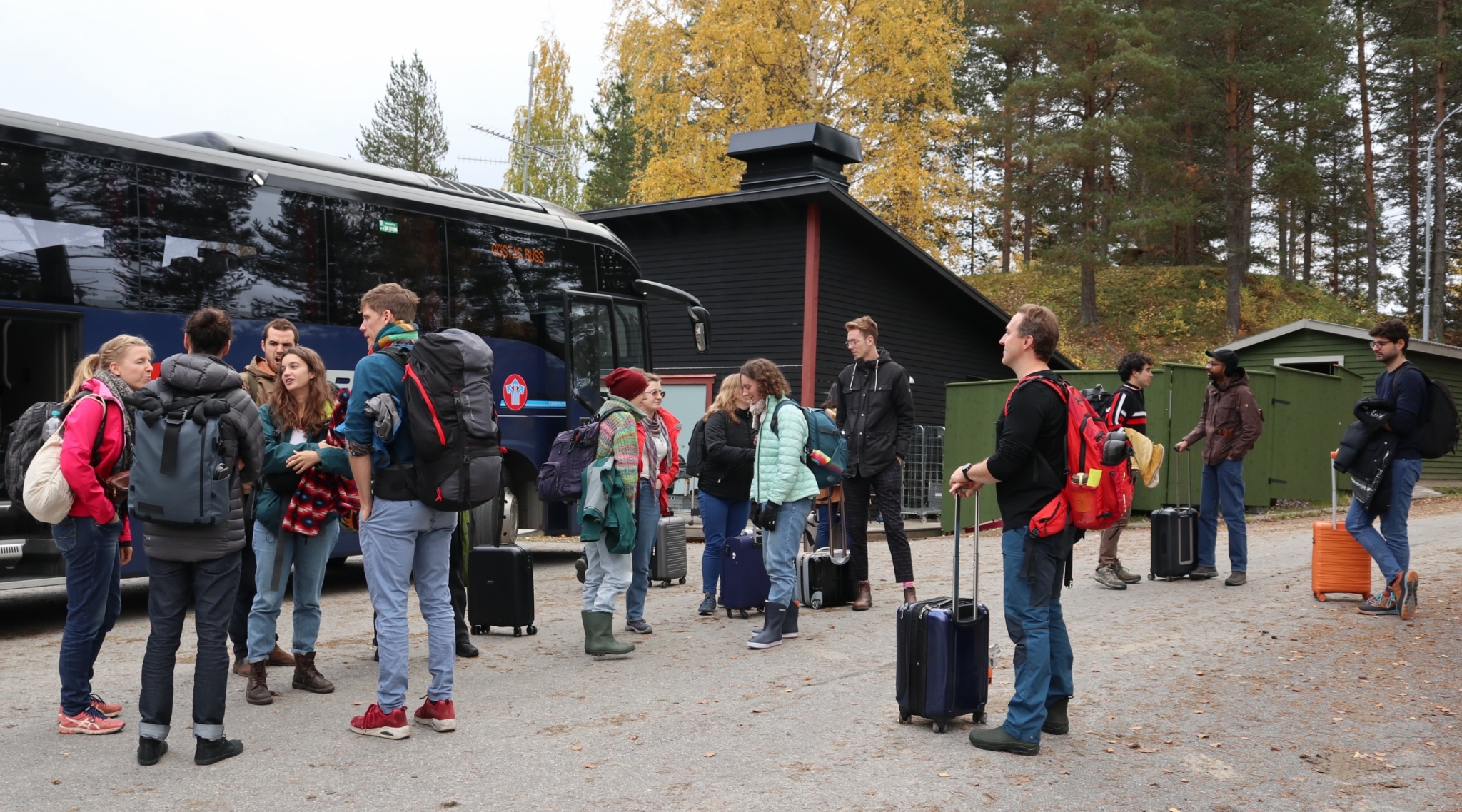 Participants at Granö Beckasin by their bus. Photo: Aswin Gopakumar

How do the participants feel at the end of Camp? Filip Edström puts it rather succinctly: “A bit tired. Happy. Also inspired.”

Participants: up to 20. In the beginning, they were mainly from Umeå University, and now most come from universities outside of Sweden.

Dates: 4 days in the last week of September